In Detroit, we have a serious problem with safety. In fact, safety is one of the two major problems that are plaguing Detroiters (the other being education). It is absolutely ridiculous for me to drive down Schoolcraft or Linwood in Detroit and it looks like driving down Michigan Ave in Canton Township because it is so dark. I feel like I am driving down a country road in some parts of the City of Detroit.

In this city when its dark crime occurs. Whether its rape or murder we already know that when its dark outside it is a sign of danger.

Continuing our profile series for Detroit City Council there are some people I would like to highlight who can assist in renovate our Detroit Police Department, increasing quick police response time and move our community forward. 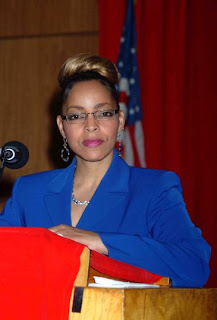 One person who gives us hope in this city is Kyra Joy Hope. Kyra originally planned to go to medical school until she was shot by a stray bullet in the early 80s and was drawn to law enforcement. Kyra has spent 22 years in the Detroit Police Department and currently holds the position of lieutenant. In her career she has been on the D.E.A. Task Force, Liquor License Unit, Chief’s Administrative Operations Division, Investigative Operations Division, and Gang Enforcement Unit just to name a few of her accomplishments.

Brenda Goss Andrews is another highly intelligent and qualified woman for the role of City Council when it comes to improving our police. As a retired Detroit Police Deputy Chief, Brenda wants to restore citizen confidence in city government. She feels that it is critical that the city of Detroit return to solvency. The current budget crisis has occurred as a result of a broken system of governance and years of inadequate safeguards, lack of appropriate oversight,in many areas including contracts, wasteful spending, malfeasance in government, and a pay to play culture.

Brenda is the only candidate that has actually controlled, prepared, and managed a city of Detroit annual operating budget including a proposed capital budget. Each budget year she had to go before city council along with the Chief of Police to present the department's budget. She has experience in directing, managing and budgeting a major multi‐million dollar new construction project; which is the Southwest Public Safety Center that includes police, fire and municipal parking departments.

Brenda has also attended the prestigious FBI Academy in Quantico, VA where each year only 250 law enforcement officers are selected to attend world‐wide.

John Bennett is one of the most outspoken police officers running for Detroit City Council. You are talking about someone who does not hold back what he said (almost sounds like me). he has been through the politics, the mud and is still on his feet. He speaks for those who are underrepresented, does not care about the spotlight and is not running for personal gain.

John wants to see a honest and principled leadership. His work and experience as a police officer, and the founder and operator of the Detroit Uncovered website, has brought him into direct and daily contact with Detroiter’s and their problems, at the neighborhood level.

John wants to make Detroit a safe city by increasing police manpower in the neighborhood, to make it a clean city by requiring business and residents to take better care of their property or
face fines and utilize forensic audit and look at the budget to root out waste and duplication.

Finally John shares our sentiment in transforming Detroit into a family city by addressing the quality of life. He wants to push to eliminate abandoned homes and buildings and clean up parks and reopen recreation centers.

Roy McCalister is another police officer that is highly qualified to sit on the Detroit City Council. In addition to leading the Homicide Unit at Detroit Police Department and serving on the Board of Directors or as president of many civic organizations, Roy was a leader of the law enforcement training efforts for an area of an entire country. As the Regional Commander (Region 3) of the Northern Province of Iraq, Roy was chiefly responsible for training, advising and mentoring the Iraqi Police Service and the larger Iraqi Security Forces.

Roy wants to improve policy leadership and city assets, enforce ordinances and resolutions as well as conduct a forensic audit of the City of Detroit's finances.

I will tell you this, this man is a man of high integrity and will hold the city accountable for our actions.

It is important that we have qualified and accountable people who view safety as a high priority issue on the Detroit City Council. Kyra Joy Hope, Brenda Goss Andrews, John Bennett and Roy McCalister are prime examples of leadership that Detroit needs.

Posted by Akindele F. Akinyemi at 3:43 AM